Share a memory
Obituary & Services
Tribute Wall
Read more about the life story of Geraldine and share your memory.

Geraldine Smith was born on August 7, 1923, at Manson, Iowa, the daughter of John and Leda (Root) Smith. She attended Manson Schools and graduated from Manson High School in 1941. She worked as a telephone operator for Iowa Continental Telephone Co. On November 18, 1945, she married Denzel Heise. They lived in San Diego, California, for a year, returning to Manson in 1946. They lived on the family farm north of Manson where they raised their family, daughters Betty and Carolyn. She later was employed at the Pomeroy Care Center and Manson Good Samaritan Center. She served on the Calhoun County Board of Human Resources for ten years, was a Hospice Volunteer, and was an active volunteer in several other areas. She was a member of St. Paul E.L.C.A. where she taught Sunday School and Bible School for many years. She enjoyed music, bowling, quilting, playing cards and most of all the fun times with family and friends.

She is survived by many many nieces and nephews who were very special to her. She is preceded in death by her parents; her husband, Denzel in 2005, daughters Betty and Carolyn; brother Robert; and sisters Vivian and Marie.

To send flowers to the family or plant a tree in memory of Geraldine (Smith) Heise, please visit our floral store. 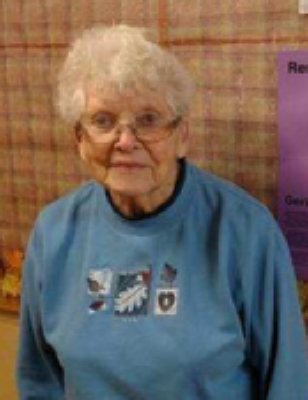